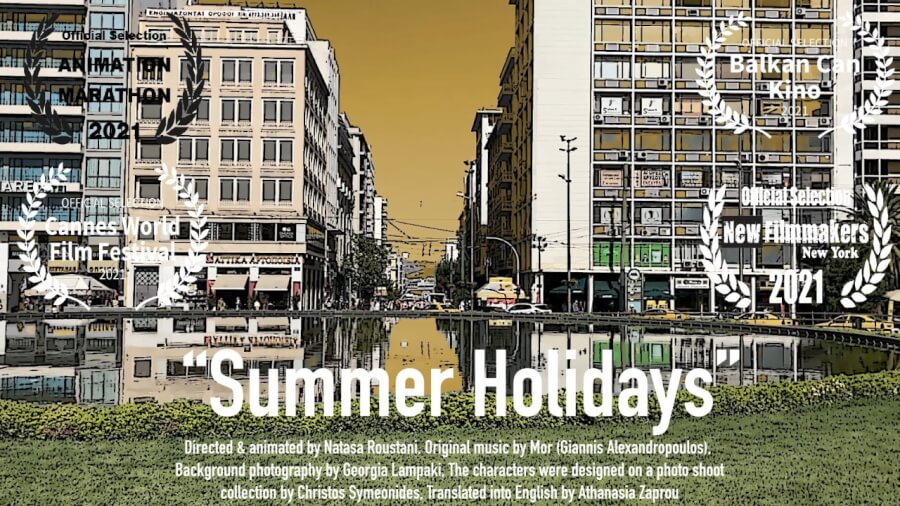 A walk from Viktoria Square to Omonoia Square, Athens, through Patision Str. Meeting the repeating historical motifs until a tidal bore ruins the city. A childhood's nightmare, repetitive attempts of breathing, a drowning city. How does a civilization end? Walking through this specific route can become a dense tour of the regional history: The Acropolis, the Archaeological Museum, the Polytechnic University - the scene of the student's bloodstained revolution against Junta on 1973, the fountains- remains of swimming pools built for the poor refugee children during the '30s, the homelessness, drug abuse and human trafficking as integral parts of the history of the area, the Zackie Oh Str- where the drag artist and activist Zak Kostopoulos was murdered on 2018 by a local goldsmith, a real estate agent and the police, the Omonoia fountain- a symbol of the gentrification of the city centre and the arrogance of the authorities. On 2018, passing by Kypseli's Sq, I saw two of my Afghan pupils bathing in the fountain and playing with a ball. Considering this image an integral part of the urban landscape, I decided to include it in my animation, placing the children in the fountain on Egypt's sq. Discussing about it with a friend, to my surprise, she informed me that this specific fountain was built during the '30s as a swimming pool for the poor refugee children. As G. Kubler in 'The shape of time remarks on the history of things' indicates the repetition of shapes and images in a larger time continuum, I wonder about the repetition of social oppressions and the people's breathing attempts, through the times of this route.
Back
Home Official Selection Schedule News Sponsors Awards Contact
arsanima.eu animartfestival.eu animationmarathon.eu athensanimfest.eu